The Sandbags and the Gladrags

Before half term I attended a radio interview at BBC Radio Stoke to speak on behalf of the North Staffs Orthotics Campaign (www.nsoc.org.uk) which aims to improve the service of users needing appliances such as splints and spinal jackets, etc. The interview was to explain the importance of good Orthotics care and to encourage membership as the campaign has been put forward for consideration by the Parliamentary Health Select Committee, thanks to local MP Rob Flello. We did our best in the time considering that we were ‘gazumped’ by the breaking news story of the woman stuffing a cat into a wheelie bin! The Campaign leaders are meeting with the management team of the local service provider soon and Radio Stoke has kindly offered to follow this up.
Strangely enough, the next day Tilly had to go to Orthotics to collect the wrist splints that had been ordered back in August. Tilly wears these supports overnight to prevent her hands turning backwards as her little fingers look like they’d like to touch her forearm. We were treated promptly and greeted enthusiastically, but only to discover that the ordered splints were not fit for purpose. Thanks to the quick thinking of the Orthotist on duty, a perfect pair of wrist splints, that just happened to be sitting on the shelf, was offered. Tilly is so comfortable in them that she now also wears the left one during the day as well, offering increased support and function. Phew! 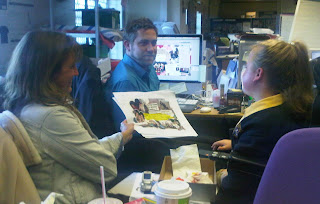 We then went on to the Caudwell Children offices to meet up with Simon from the Design Team and Tilly, complete with Happy Meal, was delighted to put the finishing touches to her book, Tilly Smiles, during a working lunch.
The Girlguiding Association never cease to amaze me with their selfless volunteering to provide their members with fantastic and fun opportunities. On 20.10.10 at 2010 the local groups of Rainbows, Brownies, Guides and Young Leaders all celebrated the 100 year anniversary of this remarkable organisation with a Glitz and Glamour Party at a local Hotel. Tilly danced herself dizzy, and as I peeped through the windows I saw her leading the conga and having a ball. What more can a Mummy ask?

We had a lovely meeting with Judy Reilly from Staffordshire Life who is doing a feature on the various folk from the Leek area. Judy was enchanting and enchanted with Tilly’s Book, especially the Forward from Bruce Forsythe, so hopefully we’ll see an article in this glossy magazine in the near future.
Tilly had her flu jab last week. It has to be said that she coped with it rather better than usual, and it was not until her little arm was revealed that she actually ‘lost it’. Poor little soul – she was so convinced that she was going to be ‘brave’ and felt so disappointed that I could have cried for her.
We were overjoyed to welcome Auntie Allie and Uncle Mikey (Rolf’s brother) for a night stop. They live over an hour and a half away so their visits are so precious. Uncle Mikey is a dream, and devotes every second to entertaining the girls, and Auntie Allie and I can chew the fat until well after the cows come home – very therapeutic. Rolf created the most delicious meal of chicken wrapped in pancetta – the perfect end to a perfect day. I always feel like I’ve been on holiday when we have such special visits. 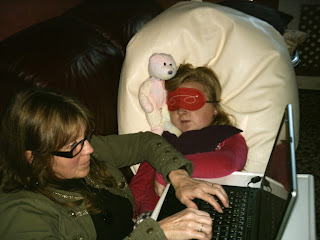 Tilly, however, took a turn for the worst the next day and was overcome by one of her dreaded vertigo attacks which sent her whirling into a nauseous oblivion. Tilly was on my knee at the time it struck and all I could do was try and hold her steady over the next six hours as she looped the loop and howled in torment as her world turned upside down. There doesn’t seem to be anything else to do but ‘sit it out’ and pray that eventually it will subside, and eventually it did. 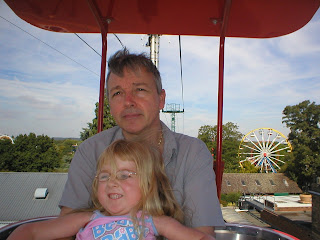 Tilly then slept on and off for the next forty eight hours and woke up ready to take on the world and be equal to one of Caudwell Children’s ‘Gift of a Day’ to Drayton Manor Theme Park, probably the last place that I would contemplate after such an episode. The rain hammered down, but we never stopped smiling as we leapt on and off the rides without the dreaded queues. Tilly’s highlight of the day was three rides on the Buffalo Roller-coaster that Rolf and I managed to man-handle her onto. We were also blessed with the support of a Caudwell Children Volunteer, Sam, who made such a difference to the smooth running of our magical day. 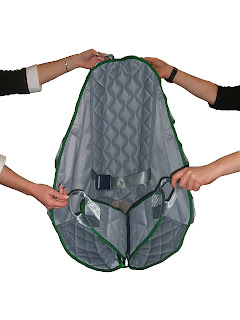 We were then treated to another day of family fun at Alton Towers Theme Park, made all the more exciting as we were trying out our new ‘manual transfer sling’ that I’d seen at The Jennifer Trust for Spinal Muscular Atrophy Conference this year. It was brilliant – and made transferring Tilly onto the rides so easy, using handles instead of grabbing Tilly’s body, and Tilly remarked how much more comfortable it was to be moved in this way. It makes me sob to think how much use we could have made of it over the years transferring Tilly from her powerchair to sledge, beach chair, hotel beds/baths, trains, aircraft seat, etc, etc. This “emergency transfer aid where the use of a hoists are not practical” from Silvalea, www.silvalealtd.co.uk and supplied by www.movement2.co.uk is awesome, but it cannot be recommended by the ‘powers that be’ because it does actually constitute a ‘lift’ contravening Health and Safety regulations. We are now going to purchase a second one so that it can be used for swimming. It’s amazing how such a discovery can be so life-changing, and will keep us smiling until there are ceiling track hoists bolted into the sky. 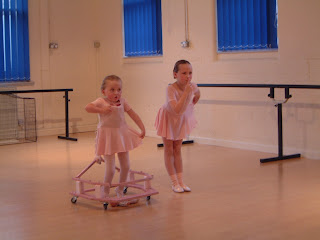 More treats as we indulged ourselves in watching the update programme on Tilly on BBC’s Jeremy Kyle Show. It was lovely to have the opportunity to see such a touching ‘blast from the past’ and to hear what we thought of it all back then in the ‘mists of time’. Jeremy Kyle was clearly taken with the girls and their ballet dancing and I’ve heard from the show that there has been a landslide of positive feedback from the viewers. Let’s hope it helps.
The week-end was a whirl of swimming, raffle ticket selling, rowing and filling sandbags! An emergency call had gone out from Rudyard Sailability to help construct a dam by filling 5 ton of sand into bags, and transferring to the bay wall. One other Volunteer, Charlotte Atkins, (who had been the Labour MP for Staffordshire Moorlands) had heard the call and pitched up to help. Other volunteers had just popped to the Lake for a bacon butty and found themselves with a shovel in hand. It was a fantastic effort by all involved and I certainly used muscles that I didn’t know I had, but by Sunday afternoon it was ‘mission accomplished’, and represented another step closer to our proposed new boat store. My lovely Dad always said ‘nothing worth having comes easy!”

Meanwhile, Rolf and the girls did a fine job spookifying the house and carving the pumpkin ready for the Griffiths’ Halloween Spooktacular with the girls ‘witchy-godmother’ as special guest. The girls had created ghastly word searches; ‘hang-witch’ games; ‘pin the cat on the broom’; and then after one of Daddies’ frighteningly scrumptious roast dinners, we ‘bobbed for apples’ and Tilly teased us with the ‘chocolate on a string’ challenge. It was a horrifyingly wonderful night - but having just reviewed the photos, I must remember to take my mask off!
Posted by Tilly's House at 14:38

All sounds all go as usual!! Last weekend, why didn't you call me? I could have had Sally my new PA, bring me over. I can use a shovel like anyone else. Well, well done any way! ring me next time!! tata.