With the thrills and spills of the festive season far behind us, and the long cold dark days stretching out before us, it was hard to imagine that January could be so very exciting........

With the darkness of January enveloping the new year it was so fabulous to be transported by Daddie to a paradise isle, also known as the Sheraton Skyline Hotel, Heathrow Airport.  Rolf treated us to this special night-stop as part of a dream week-end organised by a wish-granting charity, Rays of Sunshine.www.raysofsunshine.org.uk


The next day, after a breakfast overlooking the runway, fantasising about future holidays, we made our way to the Hilton in Kensington where Rays of Sunshine had booked us in for the next part of our adventure.  After a trip to a very swishy shopping mall, Westfield, the girls glammed up ready for a very special evening.  Rolf took charge of doing Tilly's nails whilst I concentrating on blinging up Tilly's chair.  Then we were whisked away in a black cab to Planet Hollywood, all organised by Rays of Sunshine.


It was so exciting whizzing up through all the famous landmarks such as The Albert Hall, Harrods, and Hyde Park Corner on our way up to the West End for our meal.  We spent the time recalling all of the magical moments that we've had in London and just how intoxicating a city it is for us, especially with the wheelchair-accessible buses.

﻿Planet Hollywood was buzzing, the food was great and the staff were brilliant making sure that they found us a table that would accommodate Tilly's arm supports.

We tried to ramp up Tilly's bed with the luggage rack and various spare pillows to create the profiling bed that she has at home.  Normally this works a treat, but I think that the excitement of what the next day would hold was too much and Tilly needed moving about twice an hour!  Not to worry, Rays of Sunshine had booked us a late breakfast, leaving plenty of time also to get ready for the big moment.

The morning was spent in a whirl of curling tongs and bendy rollers as the girls dollied up to meet their idols.  Rolf spent the time hauling Tilly's equipment down to our car the underground park ready for home, between blow drying Tilly's hair and unravelling her blond tresses - what a lovely Daddie!  The girls had devoted many hours to purchasing just the right outfit with matching accessories and I must say that they looked a million dollars.


﻿
At 1230 we made our way to the lobby where the longest, shiniest, most poshest limousine was waiting to collect us and take Tilly and Candice to meet five very special young men.  I must confess I shed a tear that so much had been done by Rays of Sunshine to make my little girls so happy. ﻿


The Chauffeur was fabulous and straight out of a movie and took lots of photos with his paparazzi-style camera.  Rays of Sunshine had really thought of everything as they had booked a black cab to 'follow that limo' to our destination.  It really felt quite surreal, with the flashing lights illuminating the champagne and lemonade stocked bar - we all giggled like schoolgirls and squealed as passers-by wondered which celebrities could be sweeping through London in such a glamorous car - and it was us, the Griffiths' Clan from Cheddleton.  They do say that half the fun is 'getting there' and this was certainly no exception as Tilly has always dreamt of a ride in a limousine, although she is not the only one! 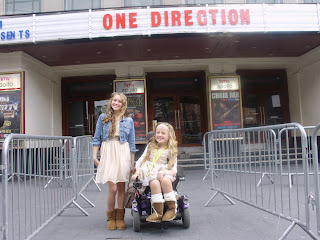 The car purred around the London streets and came to a sedate stop at the Hammersmith Apollo where blazoned across the entrance were the two words that sent the girls into orbit "One Direction".  The excitement had now reached fever pitched and the girls were screaming silent screams and smiling and squeaking so hard that I thought they'd burst.  I must confess that I contributed many a whoop and yeh! as their jubilation and anticipation overflowed.

We were met by the very beautiful Siobhan from Rays of Sunshine who greeted us like treasured friends that she was about to guide on an unforgettable experience.  I couldn't see her magic wand, but I'm sure that she had one.  Her care and attention to every tiny detail was touching and appreciated, especially when Siobhan and her colleagues created a human wall to shield Tilly as Daddie gently lifted her from the limo back into her powerchair.

We were guided through the elegant doorways of the Apollo, past a huge crowd of waiting fans who, all good-natured, complimented the girls on how they looked and asked them to pass on love and kisses to the boys.  We went into the auditorium where the stage was set ready for the One Direction concert that evening, and then with little or no fanfare, five handsome, smiling, young men walked calmly into the room and warmly greeted Candice and Tilly.

They were so relaxed and friendly that within an instant the girls were chatting with them like old friends.  They were interested in everything the girls had to say, and so happy to answer questions about their journey so far.
They were all delightful and cheerfully signed all the merchandise that the girls had brought along with such enthusiasm and happily posed for photos which were also captured by a Rays of Sunshine professional photographer.  (They do think of everything)!

They seemed genuinely thrilled to receive a copy of Tilly's book, Tilly Smiles, and said that they'd spend time reading it properly in the dressing room.  Such poppets!

I did hear myself congratulating them on being so lovely and taking time to work with Rays of Sunshine to provide such special memories for children with disabilities - they really don't have to, but I'm so glad they did!
﻿

﻿With fond farewell and heartfelt thank yous to all concerned we were then treated to a guided tour of London before returning to our car and making our way back up to Staffordshire where I am still waiting for the girls to come back down to earth!

There were other 'rays of sunhine' that brightened up January for us which included an article on Tilly Smiles in the Daily Express.  This was incredibly exciting and down entirely to relentless efforts of Jon Nock http://www.idiscreativemarketing.co.uk/ who works so hard to promote Tilly's book.  The book is now available from Amazon and all proceeds go directly to the Jennifer Trust for Spinal Muscular Atrophy.  Jon also works to shed light on all the marvels and opportunities of Tilly's Balder power chair which really is the most amazing piece of kit.  There isn't a day that passes that I don't count my blessings that Tilly has such a magical machine 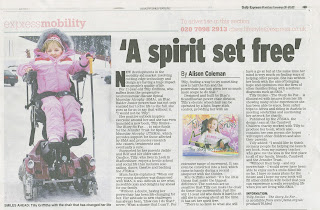 Yet more shafts of light piercing the gloom is the progress that is being made on the Rudyard Sailability accessible boatstore.  The brickwork is steadily rising and the honey-pinky, tumbled stone is giving the building a beautiful 'old cottagey' finish.


﻿
I really enjoy being involved with the actual construction of this building and so enjoy donning hard hat, high viz and wellies every Tuesday to lend a hand with other Volunteers with whatever donkey work that needs doing.  It is so incredible to see such a lovely building rising out of what was a big, muddy hole.  There have been so many supporters who have contributed to this £500K project which now only needs £100K to see the job completed, hopefully by the start of the new season in April. ﻿
One of our recent benefactors was Pritpal Nagi,  fonder of the Sanja Charity who hosted the Hollywood/Bollywood Ball for Rudyard Sailability in December.  There is a short film on U-tube created by the Sanja Charity, featuring Tilly, Pritpal and myself which provides a good update of the project.
http://www.youtube.com/watch?v=8OsO0PDxoN8﻿
﻿
﻿

January can never be gloomy because my very own ray of sunshine, Candice, has her birthday.  I just can't believe that my little girl is fourteen already.

As Candice's birthday co-incided with Chinese New Year, Rolf treated us to a Chinese banquet which was delicious.  Candice was further treated Daddie's famous 'creme brulee' which was awesome.﻿


Even more reasons to be cheerful amid the winter chill as it was Tilly's birthday three days after Candice's.  Daddie conjured up a fantastic meal of 'salmon with skin' and 'African potatoes' which is a melange of two of her favourite dishes.  Tilly went for the more traditional Alabama Chocolate Fudge Cake to make her birthday wish.

﻿
One of Tilly's presents was a tall table with a tall stool, and a tree - all for her room makeover which Rolf has been working on.  It's absolutely perfect, so very sophisticated and Tilly loves having breakfast here with Candice.  It is also so much easier to get into with her chair.


﻿
Between the birthdays we celebrated our fifteenth wedding anniversary on Burns Night when Rolf piped in the Haggis and respectfully addressed it with Rabbie's Ode.  As a former vegetarian, I even managed a mouthful of the stuff washed down with a pint of whisky and a mountain of tatties and neeps!  Never again!

An absolute ray of sunshine for all of us is Lexi who in spite of the big freeze just loves splashing through any piece of water she can find.﻿  Our daily walks are marvellous for the mind, body and soul and there are glimpses that she is learning to come back when I call, which will do marvels for my blood pressure.  Lexi is devoted to Tilly and shadows her every move and just loves to snuggle up beside her as she is big enough now for Tilly to reach her.
﻿﻿﻿
We had a  lovely yomp﻿﻿﻿ at a local reservoir, Tittesworth, with special friends and their dogs.  The wheelchair-accessible walkways meandered through the woods and around the water's edge so that Tilly and her friend, Charlotte could really be close to their doggies having so much fun.  ﻿

﻿﻿
Charlotte's family came back for a cuppa and to view Tilly's room as they are just about to take on their own ground floor disabled facilities adaptation﻿ - such a huge task, but so very necessary as they are still having to manage to get Charlotte upstairs.  I wish them the very best of luck as it can be a very stressful time.

So, it has been a rather sparkling January with so many rays of sunshine to chase any winter blues away.
Here's to all that is to come in February.
﻿﻿
﻿
﻿