Great excitement last week when the girls went to the hairdressers. Tilly had a trial run for her Caudwell Ball "Holly Wibbly-Wobbly" hairstyle, and Candice went for a new 'Hannah Montana' look. They both looked fab. Mich (the girls' Godmother) and I spent the session in the tearooms opposite, so the girls felt very grown up and independent.

Candice went off for a birthday party and sleepover so Tilly spent the time working on a certificate for the 'Aiming High' visitors at Rudyard Sailability. Tilly was inspired by the poster created by Candice for the Charity's forthcoming Race Night and spent more than three hours creating her own masterpiece. I sat beside her and observed how she explored the screen and options, never giving up or getting cross, until she succeeded. I was most impressed at her tenacity. The children who received the certificates in recognition of their day at the Lake were delighted, as were all the Carers. It's lovely to see how the personal touch can make such a difference.

We spent a great evening watching Apollo 13 - the mission that didn't make it to the moon and had an epic return trip to earth, only surviving because of the genius of the team on the ground and their collective resilience. It is an amazing film, made all the more special for us because we actually met Buzz Aldrin at the Legends' Caudwell Ball a couple of years ago. Also we'd spent a lot of time marvelling at the space missions at the Science Museum in London during a recent visit. We always say that Tilly would make a brilliant astronaut because of the weightlessness of space, but after seeing this movie she is not so sure! Even more amazing, the next morning we listened to Jim Lovell's voice, the actual Flight Commander of this mission, on the radio, as it was the 40ieth anniversary of their trip! What a humble man he seems.

Saturday morning was given a little twist of the pressure valve as Candice now has to get to Rowing Club at the Lake at the same time as Tilly needs to be swimming; and then needs to be picked up just as we are finishing at the pool. Once again, we couldn't manage these logistics without a lot of support from friends and Crossroads (and pressing the 'fast-forward' switch)! We got away with it!

We didn't stay for long at the Lake as we were off for a special treat with Daddie - a picnic in Hanley Park in the sunshine and then on to Circus Starr ,the Circus with a Purpose! This year the funding will go to our treasured Donna Louise Hospice Trust, Treetops, so it made attending all the more important. We have been to this wonderful circus every spring for about ten years and it never fails to delight us with its unique troop of clowns, acrobats, jugglers, trapeze, etc Rolf usually needs a little recovery time after sitting ringside - so close to so many sequined, thonged-leotards and shapely fishnet-clad legs! He always says "There's something for everyone!" and he's right! 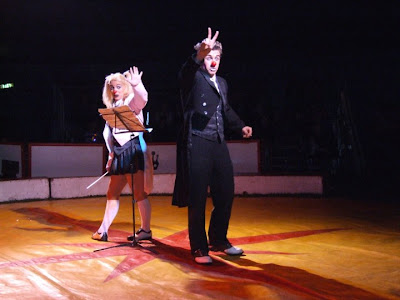 Monday's glorious weather was perfect for our twelve young people and carers that came along to Rudyard Sailability. They were never off the water, both paddling and sailing, or taking a ride in the safety boat which is accessible for wheelchair users. The mix of users and volunteers was vast and the atmosphere so buoyant, with everyone working flat out to ensure that these children had the time of their lives. Candice took out a lovely boy who was a 'natural' at sailing and who was really reluctant to leave - "I want to stay in this boat forever'! That's what it's all about.

I received a surprise phone call whilst we were wrapping up the day from that amazing sailor, Geoff Holt, whose book "Walking on Water" I've been raving about and retelling to the girls. I was so thrilled to have the opportunity to tell him personally that the story of his voyage through life with his spinal injury and then his sailing and life achievements afterwards have reduced me to a pulp, but have inspired me beyond belief. Geoff was very modest and very flattered but had rung to tell us that he'd like to feature Rudyard Sailability as his first 'Club of the Month' in his new post as Columnist on Yachts and Yacthing magazine. What a honour - I've now got to write 400 words by Friday! Best get busy!

Candice popped off again today with her friend for swimming and then a sleepover which was all very exciting. Tilly and I accompanied Dennis, Rudyard Sailability's Chairman, on a mission to 'meet the Sponsors'. What an absolute pleasure to meet the faces behind the logos on the boats and the businesses names that I've been typing for years in the various Minutes. To a man, they were all hard-working and hard-pushed, but with hearts the size of dustbin lids, eager to hear the latest Club news and asking if there was more they could do to help. It was so uplifting to see at first hand such warmth and generosity by such people helping out 'because they can', not for any personal gain.

Tilly has had another session with Ruth, the Children's Psychologist, to explore ways that Tilly might manage her fears for her forthcoming surgery, in particular, the needles and the general anaesthetic. Tilly is really enthusiastic and feels very at ease with the approach and very comfortable with Ruth, which is half the battle. We have got some relaxation and distraction techniques to work on. I am sure all this will be of help, although it is not easy to calm an intelligent ten year old at such times. I feel sick at the thought of it, but also dread that it may once again be cancelled!

There's so much to be said for the 'human touch'. I heard a broadcast on the radio about Mother Theresa in Calcutta who founded a special clinic for the dying. The staff collected these abandoned people and brought them into the hospital to die with dignity, respect and allowed them to feel the warmth of the 'human touch', if only for the first and last time in their lives. It was very moving.

This is something that I have come to notice with Tilly that will always fill me with emotion. Don't misunderstand me, Tilly is forever being hugged and kissed by us all, but forever she has always asked for me to put her arms around my neck, 'let me hug you', 'put my arms around you', etc. and it has never occurred to me until recently just how important it is for Tilly to be able to do this, to express her own human touch. The other evening, after tea, I put my head on the table and Tilly gave me the lightest and most delicate head massage, using her arm support to reach out to me.

How beautiful, and how lovely for Tilly to be able to reach out to touch another person. Something else that we might all take for granted? I know I did
Posted by Tilly's House at 15:49