THE CHERRY ON THE TOP!

It took no more than a week to dry out after our amazing experience with the Guides paddling on Rudyard Lake in a deluge! The feedback from the soggy Guides has been unanimous – “wicked!” None of us will ever forget Tilly receiving her Blue Star of Merit Medal. Tilly has decided to call her beautiful soft and gentle Centenary Bear, (number two of only one hundred created to mark the occasion), Bailey, in memory of Tilly’s Brown Owl, Janet Bailey. Janet was an absolute Star during Tilly’s Brownie’s journey, (especially on our Brownie Camp) and the Bear will be a permanent reminder of such a special soul.

Preparation for Rudyard Sailability’s pitch at the Leek Show on 31st July has begun in a swishy eaterie in Leek called “Fat Olives”. Anne and I laughed until we cried; lapped up a huge cappuccino and even managed to get a bit of work done. We were only there for about an hour and I felt like I’d been on holiday as it was such a change of scene. I never cease to be amazed at people like Anne who is Rudyard Sailability’s legal representative and has volunteered hundreds of hours of her time to Charity. There have been many such heroes who have donated countless hours of their professional skills in this way when there is obviously no personal gain as such. I am involved in all that I do because of Tilly’s motivational force, but these amazing people do it because they can. I find this very humbling.

It was very obviously the last week of school as we were all bumping into each other and felt like we were running ‘on fumes’. I had the pleasure of joining Tilly on her school trip to Tatton Park Tudor Experience where we wound the clocks back five hundred years and immersed ourselves in the activities of that time delivered by ‘real’ Tudors. It was brilliant to see Tilly tentatively poking her little finger into the gloop of the wattle and daub; sporting a bowman’s bonnet and making some gingerbread ‘Tudor-style’. Tilly was included brilliantly in all of the events and her favourite bit was being the scribe with a feathered quill during a Manor House Court Hearing. Another highlight was the Falconry Display with birds sweeping over the tops of the squealing pupils heads with millimetres to spare.

Just can’t believe that Tilly has completed Year 5 and that Candice will be going back as a Year 8 – the top of the School. It has flown by. They’ve both had a fantastic year and have achieved great things both in and out of the classroom. There is no doubt that Tilly’s inclusion into St Edward’s Junior High has been a resounding success thanks to the hard work and dedication of the entire team. Tilly rounded off the year by being top of her division for Chess after persevering in a match that she looked destined to lose for nearly three hours. Tilly was thrilled to bits and was delighted to be given a trophy on the last day’s Assembly. My lovely Daddie always used to say, “You’ll win if you don’t give in!” Tilly is obviously a chip off the old block!

The air has been filled with anticipation not only for the last day of school, but because “Nana’s on her way!” Just like Aslan in The Chronicles of Narnia we can feel all tingly because Nana is ‘on the move’ and on her way to us.
Nana has come especially to help us at the Jennifer Trust’s annual conference which this year celebrates 25 years of helping all those who live with Spinal Muscular Atrophy. The conference is held in a posh hotel in the Cotswolds and gives us all the opportunity of getting together with our SMA ‘Family’ to eat, drink and be merry whilst we also learn, laugh, cry, play, share and celebrate. The sense of communion is overwhelming as we meet up with old friends from the Clan and welcome along new members. The over-riding feeling is that we are all in this together and have a deep understanding of the unique situation that we are all sharing. We have been going to Conference for eight years and never fail to be inspired and uplifted. I was particularly struck this year by the ‘baby-bugs’ – miniscule powered wheelchairs designed for tiny tots who would normally just be learning to walk. I was also struck by a mature lady living with SMA and a tracheotomy whose partner could ride on the back of her chair on a ‘boogie board’ for short distances instead of using his own wheelchair. The scene was quite sublime to witness and very touching. 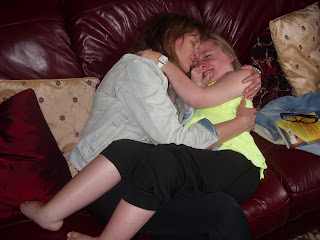 We also learnt that clinical trials lasting two years for a drug to improve the symptoms of SMA may be imminent for non-ambulant patients aged between three and twenty-five. Tilly remarked that she would rather remain a wheelchair-user than have to undergo blood-tests every three months! Time will tell. I also learnt that there is a manual transfer sling available for those infrequent transfers when a hoist is not available, e.g. from wheelchair to aircraft seat/sofa/funfair ride, etc, etc. We often have to make this type of manoeuvre and following Tilly’s surgery we often all end up in tears! Daddie is already looking into it as it looks promising.

This year’s Saturday night’s entertainment included a karaoke and fancy dress so the girls dolled up as pop stars. Tilly dressed as a vampish Miley Cyrus and took to the microphone and sang Taylor Swift’s “Love Story” to a packed room! As one might imagine, the whole conference is a bit of an emotional roller coaster anyway, but Tilly’s performance finished Nana and I off.

This year’s Jennifer Trust Conference was extra special for us as advance copies of Tilly’s book; “Tilly Smiles” was introduced. We are delighted with the look of the book that was created by Simon and Jack from the Caudwell Children Design Team, with Tilly having a great deal of input at every stage. This book has been five years in the making and has been funded by the Jennifer Trust for Spinal Muscular Atrophy. Families at the conference seemed thrilled with ‘Tilly Smiles’, scooping up all the available stock and placing orders for further copies. The next stage is to do the big print run and hopefully have copies ready to go out to the wider community at the end of August. The idea is that the Jennifer Trust will give a copy to newly-diagnosed families to ‘shine a light’ into the darkness that shrouds diagnosis. It is also hoped to sell this hard-back book for £10.00, with all profits going directly back to the Jennifer Trust. Bruce Forsythe has written a beautiful forward which hopefully will hopefully set this book into flight.

The Jennifer Trust is an amazing charity started twenty five years ago by a Mum, Anita, who found that there was no support available for her family when she discovered that her daughter Jennifer had Spinal Muscular Atrophy. Sadly Jennifer died aged eight months and Anita tragically died following a brain tumour four years ago. The legacy that has been left behind is awesome. The Charity's aim is to provide help for today and hope for tomorrow, and with family support and funding for research that is exactly what is delivered. The Charity is able to reach out to the many different groups needing quite different support at different times - a bit like offering individual slices of from a cake. The Conference is the cherry on the top!
Posted by Tilly's House at 23:02