It has been a real ‘dog on lino’ sort of week with multi-meetings, Sailability activities, a sleepover and a variety of media interest.
Tilly had her bestest friend, who has been with her since pre-school, over for a sleepover which was great. We cleared out all the junk that was lurking beneath Tilly’s bed and lowered it so that she would be on the same level as her friend so that they could natter late into the night. I think it is important to make sure that Tilly has plenty of time to nurture her friendships as she has had so much time off school recently with her various operations; it is inevitable that relationships will cool and will need reviving. Talking to other parents, it seems that friendships and parties and sleepovers can become a real heartache as children with disabilities struggle to join in. Tilly has been blessed by her friend.
Later in the week we had a visit from BBC Radio Stoke who was reporting on Racketys – the company that creates adaptive clothing for those who live with disability. During the interview I spoke of the barren ‘clothing landscape’, pre-Racketys, awash with tartan blankets and enormous waterproof capes (any colour so long as it’s blue) with absolutely nothing designed for scrumptious, trendy wheelchair users of any age. I remarked that it would be easier to kit out a pet dog in desirable adapted clothing with shops and websites aimed at this market, yet there was nothing for Tilly until Annabel and Racketys came along.
This item was picked up by BBC Midlands Today and we were thrilled to welcome the very delightful Laura McMullan to do a piece for the local news – the only challenge was that she arrived at 0700! We set our alarms a little earlier than the usual 0530 and, with the help of Candice and Tilly’s amazing arm supports, managed to have Tilly all ready for school at 0815 having done her bit for Racketys. Just glad that on this occasion I had remembered to remove the sponge roller from my fringe, which, amongst all the excitement, I very nearly sported when we went to meet Peter Andre!
That was another media highlight this week when Tilly was greeted at school with hoards of pupils and staff having seen her Peter Andre’s reality TV programme whilst he attended the Caudwell Children’s Butterfly Ball. This can be viewed for the next few weeks at: http://www.itv.com/itvplayer/video/?Filter=156756
It was a great boost for the Charity and Peter Andre came across as genuine and caring and determined to do all that he could to support the children. There is no doubt in my mind that he really is, just as he seems, a ‘lovely bloke’ with a heart of gold. The great joy is that Rolf has added Peter to his brilliant repertoire of impressions so we we’re never more than a heartbeat away from Mr Andre, or Mr Ramsey, Mr White, Lord Sugar, Mr Tarrant, etc, etc. It all adds to the fun and goes some way to keeping us laughing!
I did my “Talk” for the Caudwell Children Team and this time it was filmed so that it could be used for training purposes. With the use of a variety of props including a skipping rope, blindfold, ear-muffs, etc I tried to show just how a family can feel when they learn their child has a disability and just how much the Caudwell Children can help. It’s quite emotional to delve back into those dark days, but we are very lucky as the outcomes for Tilly have been extremely positive and joyous. I hope it helps.
The cameras kept rolling last weeks as Tilly was then filmed by Neater Solutions, the company that produce Tilly’s amazing arm supports. They came to school and captured Tilly playing Chess; cooking and then the ‘piece de resistance’ – Tilly practising for her next Ballet exam. Tilly operates the control with her foot and that leaves both arms free to explore the full range of arm movements (port de bras). Tilly looked beautiful and quite took the cameraman’s breath away as he’d never imagined the arm supports being used in such a creative way. I can’t wait to see the footage. 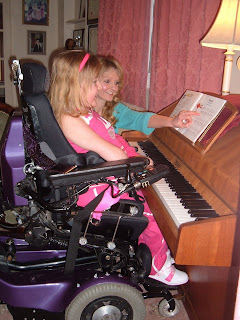 What the cameras didn’t capture, however, was the smiles on the faces of Tilly and her piano teacher, Fleur after Tilly had her first ‘arm-support’ piano lesson. I was sat outside in the van writing this Blog and had no idea how successful it had been. “It has been a million times better,” was Fleur’s quote, and Tilly said that after practising for years, “the music sounded like it ought to!”. Tilly is now practising for her first piano exam! I can’t tell you how delighted we all are – quite remarkable for a little girl who is not able to lift her own hands above her waist.

The photo shows Tilly playing the piano without her arm supports - I'll have to get some footage of her with them so that'll 'hearing' and seeing will be believing!
Posted by Tilly's House at 14:55