The week-end got off to a super start with swimming on Friday evening at Brough Park with Tilly's private teacher, Louise. It was during this session that I realised, once again, that I have a shocking sense of time and my personal management is in serious need of help! Earlier in the week I recklessly promised our support at the School Christmas Fayre, when I should be on the bus to Pwlleli for Tilly's Brownie Camp!

Ellen came along at the end of the lesson to help get Tilly showered and dressed, even though her Father was taken into hospital. Ellen didn't want to let us down! A real Star!

Saturday morning saw Candice spirited away to take part in a Cross Country Race with School, and Tilly and I went to help out at the Church Autumn Fayre. We had a real hoot and managed to make some much needed funds for St Edward's Cheddleton. Candice joined us for lunch after her race and then Candice and I actually picked out our own raffle tickets, so we should really have stopped off for a lottery ticket, but we'd spent up on the Tombola! 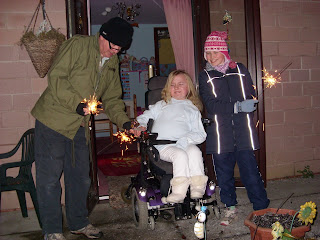 Saturday Night was the Griffiths' Bonfire Party and this year was the best yet. Rolf takes care of the fire and fireworks and normally Tilly and I watch through the window - but this year we opened the patio doors and had our hot-dogs and loaded skins inside, but beside the fire. As the evening progressed and Tilly's confidence grew I heard her squeal "I actually had one wheel outside for that rocket!" By the end of our special evening Tilly was outside in the dark, under the stars holding a sparkler. Magic. I know that there are a lot of people who do not like bonfire night, but it is true to say that Tilly has an increased sense of fear by virtue of the fact that she is unable to protect herself, run away, turn her head, cover her face, etc. So to see her so happy and comfortable on bonfire night was a real treat.

It will also be a treat when the smell of smoke leaves Tilly's room. I guess that will only happen when we wash the curtains. Rolf is currently redecorating Tilly's room so he will attend to that job when he paints the walls during Brownie Camp. What would we do without him?

Sunday was the usual mad dash down to Fleur's for piano lessons. Then we came back to pick up Daddy for the Rememberance Service. This service really means a lot to me as it evokes strong memories of my Father who served in the Royal Navy during the Second World War, and also because hardly a day goes by that we do not hear about yet another fallen solider. It was especially memorable this year because Candice, as a Guide, carried the Union Flag proudly up the aisle to the Alter, followed by Tilly who carried the Standard for the Brownies. It was a very moving and Rolf and I felt very proud. My Dad would have been very proud too.

Sunday afternoon was heavenly as we all stayed in and tried to catch up on ourselves and prepare for the week ahead. We still need a piratety striped tee shirt and wellies for Tilly's trip - but other than that - all is in hand. We finished the week end with a delicious 'Rolfie Roast' that left us feeling very blessed. We 'whizzled' through Strictly and X Factor and the the result left us feeling very perplexed.

Monday dawned with a new adventure for Tilly as she was invited down to London for a 'photo-shoot' for Full House magazine as part of their "Twelve Children of Christmas" feature. The invitation had come just as Tilly had missed her scheduled visit to No. 10, and I thought it would be a lovely boost and special treat for her. It was! Our faithful taxi driver, Nigel, turned up ahead of time and got us prompty to Stoke Station. All tickets purchased and reservations made all we had to do was relax and enjoy the ride! However, Tilly's wheelchair space had not been registered and there was now a chance that she could not travel! Relaxing cappucchino put on hold while we anxiously wait on the platform and, as luck would have it, the wheelchair space was free and Tilly drove aboard. All arrangements were made for arrival at Euston, but we were told we would have to reserve a wheelchair space for Tilly for the return journey at the Guest Services at the station. The train journey was brilliant, filled with endless Hannah Montana quizzes with Tilly finishing her packed lunch before we got to Birmingham!

At Euston we were informed that we needed at least 24 hours to book a wheelchair space and that one could not now be guaranteed for our journey home. I explained that we had actually booked the space, in person, with Tilly on 29th October at Stoke, but it had not been actioned by the clerk. I was told that Tilly had to report thirty minutes before departure to this office and they would do their best. I explained that Tilly could make her own way to the platform and only needed the ramps, but it was chorused at me in stereo by both operatives that everyone who needs assistance has to check in half an hour ahead of the departure time! This does not sound like equality of opportunty to me, but I agreed to go along with it and just prayed that there would be space on the 7pm train home, and tried not to let it spoil the day. 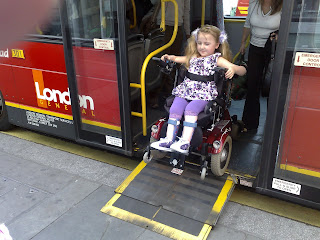 Outside of Euston we were faced with flights of steps to reach the Bus Station. Two workmen ran to each end of the concourse to find which way we should go. They even offered to lift Tilly down the steps. I was touched by thier willingness to help. Having discovered the wheelchair route we were thrilled to 'hop' onto our first London bus of the day. So easy. The driver send out a ramp to the pavement. Passangers scattle like skittles to make way for Tilly. Tilly gets on to her space - no clamps or belts - the ramp is retrieved and we're off! Tilly's joy and my amazement at this simple exercise is beyond words. No need to book 24 hours ahead or wait an extra 30 minutes before departure! Tilly can get on and off every London bus that comes along. Progress!

We strolled in the Captial's sunshine down to the Studio to be met by a delightful member of the magazine, and a flight of 6 stairs! Not too daunted, Tilly mountaineered up with three of us guides and helping. My heart was in my mouth. Following a couple more little steps, we found ourselves in the company of other families and a very welcoming Full House Crew.

Tilly was given her outfit and we found a suitable spot to change when all of a sudden I saw Tilly driving toward another little step that she'd obviously not noticed. It all then went into cinematic slow motion as I could hear myself scream her name and see her being flung forward like a rag doll with the back of the chair leaving the ground. I thought the whole thing was going to go over and crush her. I obviously leapt to try and grab her from the back, but she was already down like a spent Jack in the Box, so I tried to get to the front of the her. The posh high heeled boots that I'd foolishly chosen had other ideas, and I was reduced to the cartoon character running in vain on ice, and getting nowhere. I lunged at Tilly and landed on my knees on her footplates, and managed to lift her and the chair back to upright. We were both shaking and shocked. Tilly's spinal rods were all I could think of. Were they still intact? After a few anxious minutes for all concerned it became clear that Tilly was not injured and was, in fact, ready for her hair and make-up! I needed a stiff drink and a lie down in darkened room! The Full House staff didn't actually stop shaking the whole day and I believe to a deeper insight to the challenges facing families such as ours.

I must now away to Horton Lodge for swimming with Tilly and will finish the rest of Tilly's memorable day out later!
Posted by Tilly's House at 13:59