On Friday night we donned our ski-suits and manned the Rudyard Sailability stall with Gary, our Sailing Instructor, at the Ipstones Lights. Geoff Wakefield organises this magical event and invites local charities to come along to raise funds and public awareness. Barbie, the Charity’s finger-tip controlled, non-capsizable dinghy had pride of place and attracted many visitors to learn more about us; to offer their support and to top up our funds. Charlotte Atkins, MP, who is a Rudyard Sailability Trustee, worked enthusiastically alongside us, without a pause for breath! It was a highly successful evening.

The only drawback was that Tilly needed ‘defrosting’ when we got home as the cold had penetrated deep into her body. Tilly's tiny hand was frozen as Tilly does not wear gloves because this makes driving her wheelchair rather problematic. Next year I will take some hot water bottles, and keep a closer eye on her. Tilly always just smiles and says she’s fine!

Charlotte Atkins (MP) reported that she had had a very positive meeting with the Minister and the Rudyard Sailability's representatives in London. A meeting with an independent mediator, who will negotiate with all parties, will be arranged as soon as possible. Time is certainly of the essence as our current store is to be demolished in February next year. There were plenty of volunteers in Ipstones offering to block the path of the bulldozer! I really hope it does not come to that!

On Saturday morning I managed to get Tilly almost into the Doctor’s surgery, on the pretence of collecting a prescription, before she asked in horror, “Are you taking me for my swine flu jab?” Needles terrify Tilly and Rolf and I had been fretting about taking her for days. Tilly’s screams were ear-splitting before it was done, and then, once it was over, she stopped and smiled and asked “Was I good?” I told she was brilliant! The GP will have three weeks to recover from her shattered ear drum before Tilly is needed to go for the second shot! The only problem is that Tilly is aware of the need for another jab, and she is already worrying about it!

Tilly does not know that she is scheduled to have her surgery to lengthen her spinal rods on Wednesday. We have arranged to take her to have her blood tests on Tuesday evening after swimming and return with her the next morning for her operation. We have told her in the past and Tilly always gets really distressed with terrifying nightmares. Then, if the surgery is cancelled, Tilly is then sad because ‘it would be all over by now,’. Either way, we can’t really win, so this time we have decided not to tell her until Tuesday evening. My stomach is in a knot and I can’t really think of anything else. Roll on Thursday! 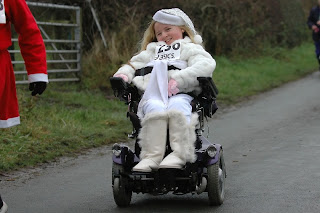 Saturday afternoon saw the entire Griffiths’ Clan suitably attired in festive garb to take part in the Winterton’s 26th Annual Cheddleton Pudding Race to raise funds for Cancer Research. Traditionally we do the two miles Fun Run, which is still quite a challenge with long steep hills on the circuit. It was a terrific event with lots of entrants, kind weather and a plum pudding for all finishers. Another sign that Christmas is well and truly on the way, and I’ve done nothing as yet!

Saturday night we were privileged to be invited to a concert by a remarkable group of singers and musicians called “Sounds of Music”. This wonderful group of people have been giving concerts for years, without charge, and collecting any donations for charity. Over the years they have raised £36,000 and supported a wide range of local charitable organisations every time they’ve reached £1000. This time they had chosen The Donna Louise Trust, the local hospice, Treetops that we are lucky enough to attend. It was pure pleasure to be entertained by these singing heroes, and an honour to accept their generous donation on behalf of Treetops. It was also lovely to be out ‘as a proper family for once’!

On Sunday Candice, Tilly and I made the two hour journey to Warwick Castle to meet up with a very special friend and four of her children. They had journeyed up from Windsor, and Warwick is about same distance from either of us. We enjoyed a wonderful picnic ‘al fresco’ wrapped in rugs, beside a beautiful garden, serenaded by peacocks. We all then trooped off to the Princess Tower only to be told that my little Princess, ‘in her own carriage’ would not be able to join the party as there was no wheelchair access and the stairs too perilous to attempt to carry Tilly. They were very sorry, but the building was too old to be accessible! The rain was lashing down and with tears burning in my eyes, we sent the ambulant princesses (and one prince) off to the tower and Tilly and I retreated from the deluge to the dry conservatory for a sit on the warm radiators and a packet of chocolate buttons!

I cuddled Tilly close in the tropical glasshouse. Tilly smiled and said that she’d much rather have hugs with Mummy than see the Princesses. I thought my heart would break. I wondered what I would have done if she’d been a couple of years younger when Princesses were ‘real’ and very important in her life. I'd have had to put a call out to Rapunzel!

We decided that we would try and visit the ‘Royal Party Weekend’ attraction, where we could see the twinkling of Christmas tree lights and hear carols being performed. However, there was a flight of steps between us and the festivities. Fortunately I had taken along Tilly’s ‘All-terrain’ buggy and the Attendants agreed that I could carry Tilly up the stairs and take her around the ground floor, so long as it was not too busy! At the bottom of the steps sat a Mummy in her wheelchair looking woefully up at the 'North face of the Eiger'. I offered to help to carry her up, but she declined dejectedly knowing that it would not be safe. Her children and mother helped carry Tilly in her buggy up the stone steps with me, and we all entered the attraction leaving the Mummy alone in the cold. The Attendants were sympathetic and repeated that the building is just too old and it would be against Health and Safety to allow wheelchairs inside, especially when it is busy, which is usually when it is raining.

The inside of the Castle was splendid and very festive. Tilly hated being pushed around in her buggy and I couldn’t get the Mummy’s philosophical expression out of my head. I wondered if the organisers at Warwick Castle had really embraced the challenges of wheelchair users, and wondered if there was anything further that they could do.

Today I received information about an amazing wheelchair lift that places like Warwick Castle might consider.
http://www.youtube.com/watch?v=WPxTGoZr8o0

We certainly tried not to let the access problems spoil our special day, but it did mean that our day was eaten into and we were forced to spend much of the precious four hours we had in different places. I guess we’ll find another location for our next reunion.

We battled the rain and traffic and made it home safely in time for our Thanksgiving ‘tea like a proper family for once’. The turkey and roasted sweet potatoes were delicious and we gave thanks for all our blessings.
Posted by Tilly's House at 16:18

I just watched that lift on youtube. Wow. And it just disappears, to become totally inconspicuous as well. D'you know, NO ONE has an excuse whatsoever do they? If it's money, then I speak for most people with disabilities I think when I say that at most places, the patrons would GLADLY fundraise FOR THEM