The Night Before Caudwell

We rolled effortlessly into the centre of London on a beautiful warm and sunny evening. The Premier Inn Hotel at County Hall welcomed us as old friends and we quickly settled into our room ready for our London adventure. The magic began with a surreal picnic in the lamplight alongside the River Thames, surrounded by illuminated landmarks under the shadow of the London Eye. The river provided a constant source of entertainment as cruisers, clippers and emergency boats crossed our vision, and the Embankment fascinated us with the waves of joggers, strollers, buskers and lovers. The highlight of it all was the most glorious music from a young Mandolin player who serenaded us throughout our al fresco meal.

The next morning was glorious so we set out on a walking tour of our favourite London haunts. Tilly loves crossing Jubilee bridge to Charing Cross and spotting all the sights, and then looking at the jewellery stalls in station. Tilly was delighted to find a diamante bracelet that fitted perfectly and then was further thrilled to be offered it as a present from the lovely stallholder. I wonder if this kind lady realised how much she had 'made Tilly's day!"

We encountered the usual problems around Covent Garden with the lack of dropped kerbs and found ourselves chaperoning Tilly along busy roads with drivers furious that we didn't have our little girl on the pavement. If only they knew! Rolf has written to Boris Johnson's office, but apparently accessible pavements in this area are not the concern of the Mayor of London.

Access is not a problem once in Covent Garden as we descended into the bowels of the old market to reach our favourite lunchtime restaurant, The Crusting Pipe, and enjoyed the meal as well as the terrific live music. It was good to see Tilly chatting so confidently to a couple of fellow diners who happen to provide support to a family with children living with SMA. They were amazed to see Tilly eating her own lunch using her arm supports and went off filled with armfuls of Tilly's suggestions and ideas. 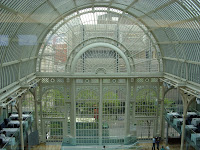 We were then treated to an ad hoc private tour of the Royal Opera House by a kindly doorman - such a special glimpse to see the corps de ballet rehearsing. It was amazing and we are hoping to actually go to a ballet the next time we are in town with Candice. We missed her so much, but took comfort in the fact that she was having a marvellous time in France with school. 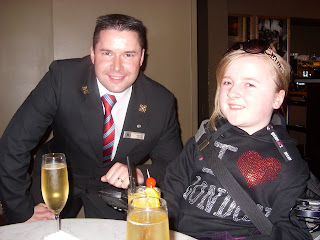 The day continued to be blessed as we decided to take Tilly to listen to the pianist in the lobby of the Waldorf Hotel. We were instantly warmly welcomed by sunniest Concierge I've ever met - Daniel. Daniel kindly gave us an informal tour around the public areas of this traditional hotel. It was wonderful. He was so enthusiastic to tell us of the history of this majestic building and even more keen to show how accessible it had become. Before we could blink Tilly was being transported in specialist lifts to new areas of the lobby. Daniel was the most marvellous host and finished the tour in the Hommage Bar where he promptly ordered Tilly a non-alcholic cocktail and a glass of Champagne for Mummy and Daddy. I could have wept! Daniel explained that the keys on his lapel meant that he had the keys to our comfort, safety and enjoyment and that if ever we needed him we knew where to find him. He certainly won the keys to our hearts. His devotion to service was overwhelming, and Tilly has now decided that the Waldorf will be her choice of hotels in the future! We shall never forget Daniel's smile, energy and care and just wonder if he has ever thought of running for Mayor of London! He'd certainly have our vote. 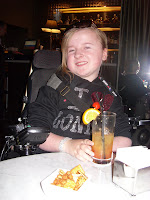 We floated out of the Hommage Bar and tried to get ticket to see Legally Blonde at the Savoy Theatre. Unfortunately there were no wheelchair accessible seats available, but we were invited to wait at the Stage Door and say a quick 'hello' to one of Tilly's favourites, Duncan James, who she'd met on previous occasions. Duncan was delightful and stopped to chat and even signed Tilly's plaster cast!

As the sun was setting Tilly was drawn to the chocolate milkshake in Garfunkles, so we dined on a pavement table and watched the world rush by. Bliss!

Back at the hotel we decided to wash Tilly's hair in readiness for the Caudwell Ball the next day. Unfortunately the 'disabled' room did not have a wheel-in shower, but a regular shower-tray with a six inch step! Tilly's recent surgery on both legs made the job of trying to lift her and her glide-away seat all the more challenging, with all three of us ending up soaked to the skin. There is no way that I could have managed without Daddie, and it is hard to imagine how an independent wheelchair user would cope. I guess Rolf will mention this in his feedback to the Premier Inn.

We tried to settle down for the night, but it was enormously difficult knowing that the next day was set to be one of the most memorable days of the year, and here we were, in spite of the various challenges, living it. Amazing! How blessed are we?
Posted by Tilly's House at 22:23