We floated very gently back down to Earth following the Butterfly Ball, savouring every detail. The next exciting event was the collection of Candice home from her trip to France at 0300! We bundled a sleepy, happy girl into bed at 0400 and were amazed to see her just a few hours later up and dressed and ready to go rowing. What a girl!

Later that day we were lucky enough to be at The Heroes Party organised by the Donna Louise Trust, Treetops. It was a brilliant event packed with fun and games and it was super to catch up with the other families and staff. The highlight of the day was the arrival of Spiderman by helicopter. It was fantastic to be so close to a real helicopter landing and taking off, especially on such a hot day! Treetops are brilliant and these get-togethers between week-end stays do keep my batteries topped up. 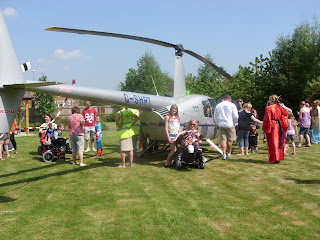 The girls played in the Chess Megafinal and Candice had great success and was the top scorer in her section making her this year's U12 Staffordshire Suprema and able to play in the next stage which is the Gigafinal. Tilly also had a good day and was the runner up in her section.

My lovely Mum arrived to help us get through Tilly's latest surgery - the extension to her spinal rods. We went in early morning and Tilly was practising her 'keep calm' routines that she'd learnt with Dr Ruth, the Psychologist. The longest of walks up to Theatre was slightly improved with Tilly not getting into quite such a lather. Once inside the Anaesthetic Room there was a dramatic improvement and Tilly just closed her eyes and listened to my voice telling her stories of a trip to a magical island (just like Treetops)and she floated away. The operation was only due to take an hour and it was wonderful having my Mum waiting outside to pick me up and lead me to the cafe where we waited. 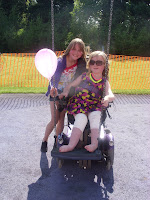 We wandered back up only to be greeted by the Anaesthetist who told us that Tilly had only just gone into theatre as they had had a great difficulty in finding a vein and inserting the tube. This news meant that Tilly would be 'under' for longer which is always a risk for someone with breathing issues. I could feel myself falling apart, but Mum held onto me. The Anaesthetist took my mobile number and promised to ring when Tilly was ready to go to recovery, which he imagined would be in about another hour or so.

Imagine my shock when ten minutes later, in the shop, the Anaesthetist rang me. I could only imagine he had bad news, but instead he reported that the Surgeon, Mr Ahmed had worked wonders and the last stitch was going in. Mum scooped me out of the magazines and we made our way back up to Recovery.

Tilly arrived, without her tube, looking beautiful, but naturally, very distressed. All her readings were good, and Pat the Nurse was taking care that Tilly was comfortable and managing the pain. Tilly asked for Daddie, and as if by magic, he appeared by her side. Daddie couldn't stop as he had to get our windscreen replaced, but he had been there just when he was needed the most.

Tilly was quickly transferred back down to the Children's Intensive Care Ward lying on her back looking pale and uncomfortable. Unfortunately, it was necessary to change Tilly's bed which took six of us, with Nana holding onto Tilly's head which she felt was falling off. Tilly was wailing in discomfort and we struggled to gently manoeuvre her; and then as we sat her up and I held her to my chest, we heard this little voice say, "Oh, that's better! Did you bring the Suduko Nana?" It was like a miracle. Once she was off the 12inch wound, Tilly couln't feel it any more. We all looked at Tilly and each other in disbelief. I went outside to phone Rolf and one of the Consultant's arrived and asked how Tilly was. I told him that she'd just come back from Theatre and was sitting up doing a Suduko with Nana, and he laughed and said, "That sounds like Tilly!"

More amazingly, by the end of a very busy day, Tilly wondered if she would be able to go home. The word went around and it came back that Tilly could only go home if she had full spine X-Rays, which would mean crossing the hospital grounds to the Orthapaedic Unit. Tilly was up for it, and off we went. Once in X-Ray it took two of us in lead pinnies and Tilly's amazing chair, which quite literally collapsed down around her, to get the desired shots and we were off!

Daddie and Candice scooped us up and before we knew it we were at home with a Happy Meal watching Hannah Montana! Tilly had made an amazing recovery. Rolf, Nana and I looked at each other, still shaking, and wondered how long it would take us to recover - it was actually quite surreal.

We really wouldn't have managed without Nana, as to add an extra twist, we didn't have Tilly's Carer and the ceiling track hoist broke down. It was very difficult to move a little girl who had recently had surgery on both legs and her back - without our mobile hoist the only option we had was to lift Tilly by her ears! However after plenty of R&R and scrabble with Nana and Candice Tilly is now back at school, and quiety getting back into her usual activities. Tilly is also thrilled to be getting back into her summer gear which looks all the more fabulous as she is once again sitting up tall.
Posted by Tilly's House at 14:04