With Tuesday's reasonable weather forecast and the electricians in the house for the day it seemed a golden opportunity to disappear off for a much anticipated visit to Blackpool to take in the famous "Illuminations". So much better than spending the day in Ward 107 getting ready for Tilly's spinal surgery!

Following an easy journey to the coast, the difficult job of finding the parking spot, we found ourselves enjoying fish and chips for lunch, in the sunshine,on the North Pier. It was glorious. The simultaneous assault on all senses reassured us that we'd arrived at the seaside. 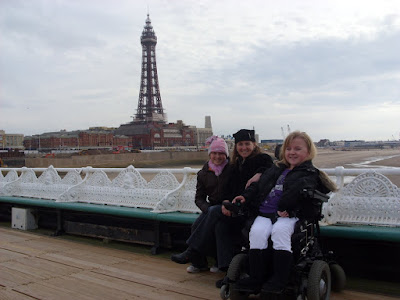 Scaling the mighty Tower was our next challenge, but the guardians could not have made it easier. We were escorted via the staff lifts directly to the world famous Tower Ballroom, where "Strictly" is due to be filmed next week. It is truly magnificent. Our visit just happened to coincide with The Children's Ballet which included Abba routines, Irish dancing, Jazz and a fabulous rendition of the Les Miserables' "I had a dream". Who could ask for more?

From the sumptuous ballroom we were whisked up, like VIPs, via all sorts of back passages and secret doors, to the lifts to make our ascent. The wheelchair assistance was remarkable and we told our guide all about how the girls had raised £1.2 million for the Caudwell Children to buy similar wheelchairs for other children like Tilly. Rolf and Tilly were beginning to wonder if this was all such a good idea, as the ground fell away from them and we found ourselves 'on top of the world ma!'. The views were breath-taking. Candice and I spiralled our way even higher to the highest level and were shocked to learn that whilst we were away Tilly and Daddy had bumped into Trudi Beswick, CEO of the Caudwell Children, enjoying a day out with her husband and little boy! Talk about a small world!

We zoomed down the Tower and found ourselves in need of ice-cream, with the Central Pier beckoning. We snaked through the myriad of fascinating people; dodged the trams; ran the gauntlet through the thrills and spills of the funfair rides; and found ourselves right at the end of the pier with nothing between us and the sunset but a shimmering corridor of light on the sea. It was so surreal to find ourselves so far from 'the madding crowd.'

We tore ourselves away and felt compelled to get onto the beach as the tide was in, and we'd never been on the beach in the dark. Tilly had her socks peeled off, and made tracks in the sand as the donkeys made their last trail for the day. The waves crashed, the gulls cried, the darkness grew and then the lights came on! It was stupendous, cartoon-like, we didn't know which way to look, it was all so amazing.

Our evening meal of freshly prepared sizzling steak baguettes was delicious and enjoyed 'al fresco' sitting in amongst the throngs and excitement of the busy end of Central Pier. The atmosphere was palpable and so convivial.

We crawled along the Golden Mile in our vehicle, drinking in the spectacular displays and planning our next visit which would involve parking up the powerchair, and a ride on a tram and a trip on a horse and carriage.

The girls snoozed all the way home, happy as little sand girls! Blackpool rocks!
Posted by Tilly's House at 17:44